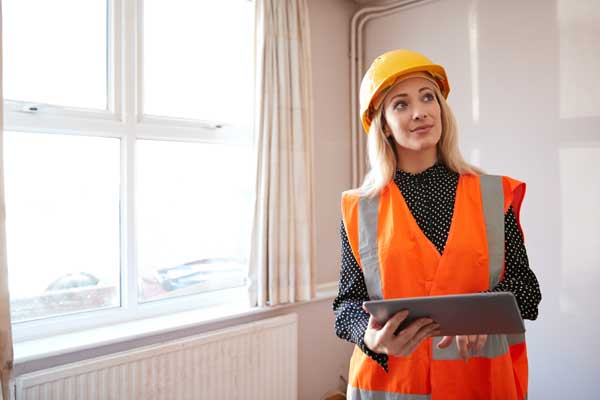 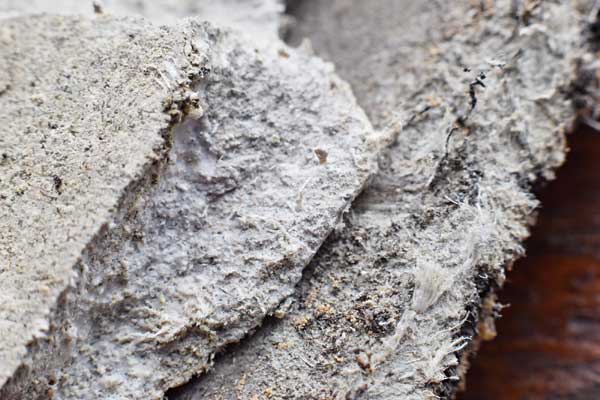 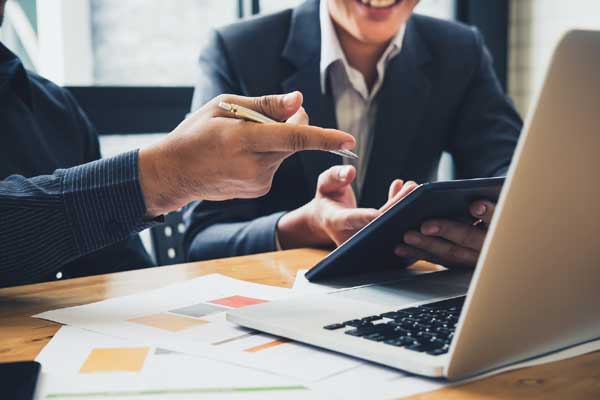 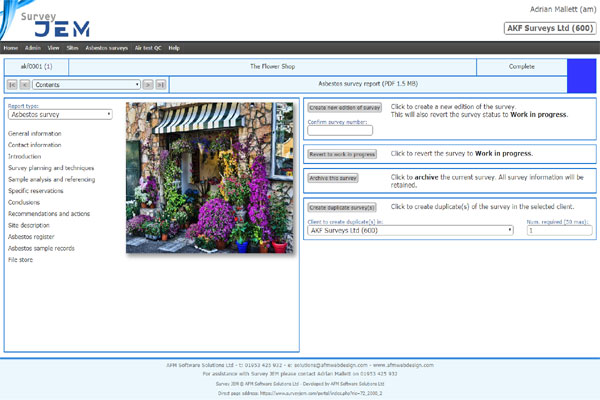 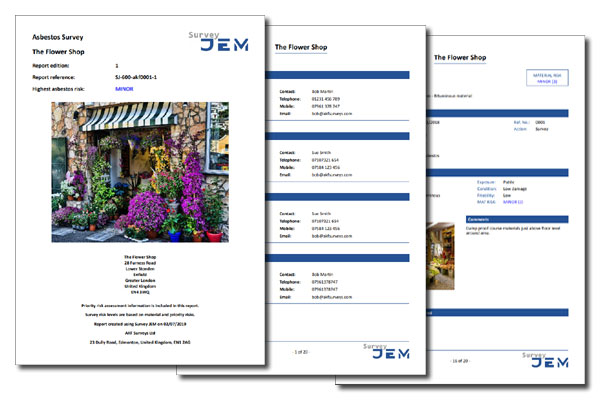 Carrying out a thorough asbestos survey takes time so creating the final report should be as quick and easy as possible. Survey JEM™ has been designed and built using a wealth of knowledge and experience from twenty years of creating successful asbestos surveying software.

Information collected during the survey is recorded and displayed in a comprehensive and efficient manner. The report is designed to be easy to follow. For surveys which form part of an ongoing asbestos management plan your clients have online access to all their information.

It is important for a premise or site to be fully documented following a survey. The site description should include all areas accessed during the survey as well as any which were not accessed or where no suspected asbestos containing materials were found.

All information regarding any samples taken is clearly indicated on both the online applciation and the PDF report including relevant laboratory results, drawings and certificates. Any risks found are calculated automatically and clearly indicated for individual samples as well as for the survey as a whole.

A data entry process which works

The process of data entry in Survey JEM™ is designed with the end user in mind. It is easy to use and contain checks to help maintain a high level of accuracy. Survey JEM™ uses a tried and tested process in which data is entered in a methodical sequence taking you smoothly from a new survey to the final report PDF in an efficient manner.

Survey JEM™ uses a system of layered data storage to minimise data entry time as well as using automated entries in other areas to save further time. Survey JEM™ cannot carry out the survey for you but it can make the process of producing a report easy and painless.

Why are asbestos reports required when asbestos is banned?

We now recognise that asbestos is a known carcinogen that is commonly found in building materials used in many buildings and many believe it has been banned for many years. However, asbestos wasn’t actually fully banned in the UK until 1999.

There were some earlier asbestos prohibition laws introduced and the United Kingdom as far back as 1985. These banned the import and use of blue asbestos, known as crocidolite and brown asbestos which was known as amosite.

It took quite some time before the government finally banned the use and import of white chrysotile asbestos in 1999.

Asbestos was still being used extensively in house building before the ban in 1999. A concerning fact is that it is estimated that as many as 50% of homes built before 1999 may still contain asbestos and that means a high number of properties could be affected.

Older homes may still contain Artex, which was still being made with white asbestos right up to the the middle of the 1980s. Asbestos floor and ceiling tiles were also very popular from the 1950’s, through to the 1970’s, so the chances are that older properties that have not been extensively renovated will still contain asbestos. This is why, although banned, we still need to conduct asbestos surveys and generate asbestos reports.

Any new buildings constructed after 1999 should not contain any asbestos materials, as all use of asbestos was now outlawed in the United Kingdom.

As well as asbestos having been fully banned in the United Kingdom in 1999, there were a number of other laws passed that regulated safety when working with and being exposed to asbestos materials. Legislation such as the Control of Asbestos at Work Regulations were introduced in 2002.

The new regulations meant that anyone working with any asbestos insulation products, mainly for the removal of such materials, must possess an asbestos licence in order to safely carry out the work. Additionally, the new asbestos at work regulations set maximum exposure limits and also ensured that any asbestos must be identified and managed properly. Thus, having an effective asbestos reporting software tool such as Survey JEM™ is vital for the surveyor and anyone involved with managing asbestos.

Asbestos is a silicate mineral that is mined and engineered for many different uses. Frequently, the silicate is woven into a fabric structure. Asbestos is used in the manufacturing process of a variety of building materials, mainly for its heat and fire resisting properties and good insulation capabilities. The mineral is fibrous by nature and its particles can exist at microscopic levels, so when breathed in, particles enter the lungs. Any exposure to asbestos can create a health risk to both construction workers, as well as future occupants of buildings that contain ACMs.

What exactly is an asbestos survey report?

The main purpose of an asbestos survey report is to determine whether an existing building contains any asbestos containing materials, commonly referred to as ACMs, prior to demolition or habitation. The survey process includes an inspection, sampling, and laboratory testing of the building materials inside and around the premises.

Asbestos often exists within floor tiles, ceiling tiles, sound insulation, pipe insulation, fire proofing material and thermal insulation. The actual presence of asbestos is best determined by taking and testing samples of the suspected materials prior to works being carried out, occupation or demolition.

Asbestos survey reports prior to purchase

Sometimes buyers and sellers order asbestos survey reports. Although it’s not illegal to sell a property containing asbestos, if you know that there is asbestos present in the property, you must disclose this to any potential buyers. Providing that the material containing asbestos appears to be in good condition, this is all you are legally obliged to do to comply with the asbestos disclosure requirements when selling a property.

Information about the asbestos content of a property can be helpful for those planning to buy and re-build. After all, a buyer with plans to renovate a property may face unforeseeable costs and delays without prior knowledge of asbestos containing materials.

Regulations require asbestos survey reports for applicable buildings that are occupied or undergoing renovation or demolition. This requirement is to safeguard construction workers and occupiers of the building from inhaling asbestos fibres.

Asbestos inspections form the basis of the asbestos survey and comprise a visual and physical assessment of each area that contains suspected ACMs. The asbestos surveyor will assess the friability and condition of the materials suspected of being ACMs. The surveyor will conducy a visual inspection, take photographs and samples which then undergo analysis at the laboratory. Samples undergo analysis to determine the presence of asbestos and the amount present in the sample.

Once the analytical results are returned, the asbestos survey company can prepare a report documenting the ACMs. The report notes the ACM locations and estimated quantities, where possible. The report also classifies the types of ACMs discovered and identified. The report will contain all relevant data such as the sample locations with the aid of photographs and annotated floor plans. The asbestos survey report also details the physical condition of each ACM, as well as the recommendations for management or removal.